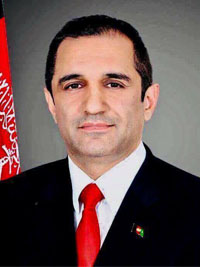 Mr. Dr. Fridon Barikzai son of engineer Ab. Hakim Barikzai was born in 15th of Aqrab 1350 in Farah province in Noda village into a religious and open – liberal family. his parents and all villagers Noda are  grandchildren of Grandfather Shah and are residents of Zambli district of Gerishk which have moved from Helmand to Farah and Nimroz provinces and they  are cousins of Mr. Qadir Khan one of the well-known figures of the Gerishk district.

In 1355 Mr. Barikzai was enrolled at Shah Hossien Hottak School he was an intelligent and vigilant student. That he could successfully take all the first grade lessons into 20 days and through level stabilization test could pass two other grades successfully as well. While he was a boy of only fourteen and half years he graduated from high school and apply for a scholarship in the field of medical by German country, but due to being underage he was debarred to receiving the scholarship.

Thus attended the institute of medical and finally he was graduated from university in 1371 in first grade and also he continued his studies master degree in the field of international relation.

while he was studying in 4th grade of the medical faculty he translated valuable book like methodologies of clinical medicine from English into Pashto and after evaluation by the scientific board of the institute was published in 1367. For a while he worked as an internal physician and instructor at Medical Science Academy which acted as a compassionate physician and instructor and conducted excellent behavior with patients and students.

During the civil wars which most parts of Kabul city was badly damaged, he stayed in Kabul and then went to Nangarhar and joined the boundless Doctors Organization as a manager.

Until 1381 he was busy in political and business activities inside and outside of the country.

He is also one of the founders of Barak National Foundation which has the honor of selected chairman for eight years and through this he has been able to present   excellent services among people and has tried his unremitting efforts to promote the justice and brotherhood.

Mr. Barikzai has also attended to different workshops and seminars and had many different official journeys to various European and Asian countries. And has done his best in order to share his experience with colleagues in the direction of coordination, development and reforms in the ministry and strongly believes in positive changes.

It is worth mentioning that Mr. Barikzai has done lots of remarkable actions in the direction of the peace strengthening and national unity and as an influential tribal personality has constantly been trying to solve the people’s problems among themselves and has been inviting them to support the legal government.

Moreover, in social, political and cultural affairs has also taken active part and shown his capacity and capability through sharing his effective and useful thoughts and ideas in the held meetings.

Mr. Barikzai’s different traces and essays has been published by different magazines and newspapers of the country.

In 4th of Sawer 1397 through the recommendation of Ministry of Borders and Tribal Affairs of Islamic Republic of Afghanistan president Moh. Ashraf Ghani assigned and introduced him in an inner meeting to employees and in charge officials as the Professional Deputy of the Ministry.

According to Mr. Barikzai governmental position is not a privilege, but in reality it is a great responsibility. And he hopes to be a great servant of people through this.

As a high rank official of the ministry does his best to pave the way for thousands of high school students related to the ministry.

Likewise, during his evaluation from ongoing processes of the teaching employees and in charge officials, tries to bring new changes in their careers and responsibilities.