Deputy Ministry  of Coordination of tribes and jirga Affairs in the Ministry of borders and tribal affairs
DM of Coordination of tribes and Jirga  Affairs is an important DM office is disputes of tribes to settled through Jirga in center and provinces and promote unity and brotherhood.
All the Main tasks of this deputy ministry are as follow:
-Promote Unity among tribes affairs to gain national goals.
-Analyzing and identification of tribes for creating peace process and national unity.
-Consolidation of national unity among tribes, explanation of government main goals and holding Jirga according to policies of MOBTA.
-Creation of close cooperation among tribes.
-Making public awareness of government activates relating to peace and security
-Continuous Peace process talks through Jirga among tribes
-Creating tribal councils as consolidation of  national unity for the activates of governmental structures.
-Strengthen national unity by creating tribal councils
-organizing  meetings  opportunities among government and border tribes for help and coordination
Advising government organizations for gaining national and political unity
-Analyzing and studying of the social, political and military issues of border tribes and coordination with some national and security organizations of government and giving effective tasks for them
-Settling tribal and regional disputes through tribal councils and Jirga.
-Implementing policies, decrees, enactments, guidelines in border regions.
- Identifying scholars for help in the leading section of Afghan society.
-Introducing guests for accommodation to the protocol department and evaluation of their registration.
-Preparing and distributing tribes cards to untitled people.
-Registration of Tribal councils.
-Continuously Receiving reports of tasks and activates of all provincial departments. 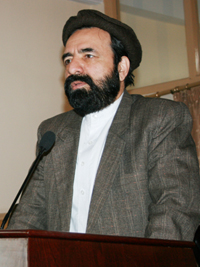 Biography of Mr. Mohammad. Yaqub Ahmadzai the Deputy Minister  of Coordination of tribes and jirga Affairs Moh. Yaqub Khan Ahmadzai son of Moh. Suliman Khan Ahmadzai was born in 1962 in Logar province in a religious family.

He went to primary school at Chahardihi School and secondary school at Habibia High School. As he was born in a defiant family his father and his three elder brothers were famous politicians. and, in 1978 during  of the communistic regime, they were arrested and martyred. That’s why he migrated Pakistan and get into political activities.

In 1981 to continue his higher education left Pakistan for Saudi Arabia. And studied literature at Riyadh University. Completing his high education he repatriated home and then to rescue the country from claws of the Soviets and independence started tireless political and (Jahad) war activities and succeeded to make connections among different political parties. at the end of the war, the Afghan Muslim nation had succeeded and entered Kabul . Mr. Ahmadzai in Kabul he start activates for consolidating national unity and peace so that can be negotiated with parties involved through the peace council to the extent of preventing civil war.

Likewise, in 1994 the former President of the Islamic Republic of Afghanistan appointed Mr. Ahmadzai as General Director of AFSOTER Transitional Company.

After two years of successful working there once more during the Taliban regime in 1996, he left for Pakistan and joined with the freedom fighters. After the collapse of the Taliban regime, he repatriated to Kabul and he continued his duties as a head of AFSOTAR.

In 2002 according to the prerequisite of the presidential palace, he was appointed as Head of the Medical and Technical Substances Department at the Ministry of industries and commerce which during his seven – month – a working period could provide excellent services for people.

Mr. Ahmadzai has done his best to strengthening peace because of his excellent performances were then assigned as Head of provincial Relationships in the mentioned ministry.

And based on his high performances during his different working mission through prerequisite of the ministry was assigned as the Deputy of Coordination of tribes and jirga Affairs at MOBTA by the presidential palace in 2007 up to now.

Let it not be forgotten ,that Mr. Ahmadzai has received two first grade citations, some third-grade citations   certificates and also has been awarded lots of retributions through concerned organs.

Mr. Ahmadzai is not only an excellent manager but also an accomplished poet and the author which several of his them have been published via different national newspapers and magazines including the ministry press.